Eoin Glaister on his Aquilo trilogy: "We stole a young ice skater's life" 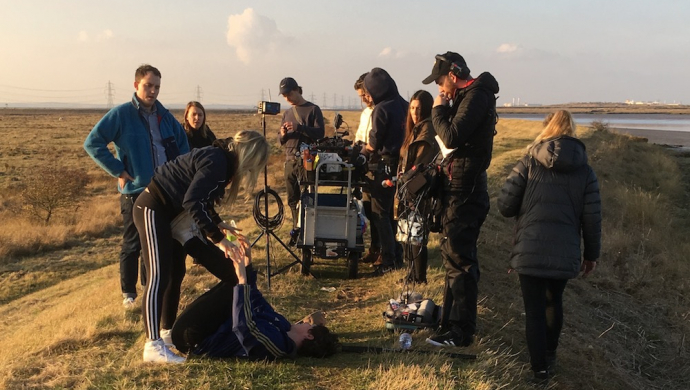 After making a two-part narrative video for Lancashire duo Aquilo for their second EP - which resulted him winning an MVA in 2015 – Eoin Glaister has now gone one better for their debut album Silhouettes.

He's directed a trilogy of music videos, for the songs You Won't Know Where You Stand, Silhouette and Almost Over, which work together as an overarching story of an expanding universe of characters in the Isle Of Sheppey in Essex. At its core there is the story of Courtney, a talented ice skater with aspirations to compete at the highest level, her supportive father (played by one the UK's great character actors, Perry Benson) and her well-meaning but distracting boyfriend. Each video takes the perspective of these characters to create the bigger picture. The storytelling emerges from the believability of the characters and it's a beautifully observed portrait of everyday English life.

So we asked Eoin (above, far left, on set during the shoot) for the story behind the Silhouettes trilogy – and discovered the role of a real Essex girl called Courtney in the making of the videos.

Promonews: Was the prospect of a trilogy always something that Aquilo wanted, or your suggestion?

Eoin Glaister: I’d worked with Aquilo before on a pair of videos, so when they approached me to make something for the album I think everyone was keen to make something bigger. Initially we’d planned on doing more, but then a trilogy seemed logical. It has a better ring to it than tetralogy.

What inspired you to create these characters and tell this story?

The album first and foremost.  It’s pretty heartachey. I was given the album and then sort of left to my own devices for a bit so I got emotional and started building up these characters.  As this wasn’t the first work I had done for Aquilo, there are conscious similarities in the approach as I wanted the videos to be of the same universe. I often write for screen with D. A. Nixon but this was our first music video collaboration.  When the stories got formalised into scripts he was brilliant at injecting clarity.

Did the narrative evolve once you'd cast the actors?

Not so much when we cast the actors but certainly once we started visiting potential locations and meeting people.  We essentially stole a young ice skaters life.  We met Courtney when we were scouting.  She is fucking amazing: incredibly talented and super cool.  Not only did we use her as the skating double in the videos but we also borrowed a lot of her possessions for our character’s room. The GB hoodie that our lead wears is hers which meant that we had to change our characters name to Courtney and then it all got a bit meta.

"Shooting outside of London is an absolute dream.  The videos wouldn’t have been possible without the generosity and willing of the people we met"

I knew I wanted to set Silhouette in a local dance class but didn’t really have any idea of how that might operate.  Emma Wellbelove, who produced the trilogy, pulled incredible feats and kept magicing up miracles.  Emma convinced a whole class, teacher and all, to come down to our location in Sheppey which then ran sort of as normal but with our characters inserted.  Similarly we dropped Alfie, the kid that plays Jack, in a real football club and then ended up casting two of the other boys as his pals. Sheppey ended up being this sort of real life set that we were manipulating.  Which Charlie Goodger (below) was then able to turn his exceptional and delicate eye to.  He’s brilliant.

Shooting outside of London is an absolute dream.  The videos wouldn’t have been possible without the generosity and willing of the people we met and the aforementioned skills of Wellbelove.

When and where (and for how long) did you shoot the video, and what were the main challenges during the shoot?

We shot this across three very long days at the end of November on the Isle of Sheppey and at the ice rink in Gillingham.  There were plenty of challenges, some normal - time, money and complete lack of understanding of tidal times - and some unusual, including the unpredictable fragility of butterfly wings and a hallucinatory fever that involved me trying to get into bed with Nick the sound recordist.  He was very relaxed about the whole thing.

As with any project it continued to be challenging right up to the point of delivery but at every stage excellent people gave up their time and extraordinary skills.  Zdravko Stoitchkov is a butterfly king, skills verging on the dark arts and Marty McMullen at Rushes did an incredible job colouring these as always.

Shooting for three days on 35mm shouldn’t really have been possible.  I can’t thank Agile Films and the crew enough for making it so.

Out of the many stories and themes that arise in the trilogy, which means the most to you?

I’m pretty sick at ice skating so I guess YWKWYS.  We tried to do something different with all of them and hopefully that comes across.  I’d been keen to work with Perry since driving him home as a runner on a feature film I was working on five or so years ago so that felt like a bit of a coup.

"I’d been keen to work with Perry [Benson, centre] since driving him home as a runner on a feature film I was working on five years ago so that felt like a bit of a coup."

There are a few scenes that appear in Part 1 that are expanded upon with dialogue in later parts. When did you decide upon this structure, and did that cause headaches when it came to the edit about what to leave in and what to save for later?

In short, anything discerning was likely Laurence Halstead who cut them. They were always conceived as a trilogy so there was some fairly precise plotting beforehand and, when it came to post, Island were super cool and let Laurence cut all three before any were released which allowed us to play around with them as a whole.

You left us wanting more at the end of each part of the story – incuding part 3! So would you be open to expanding beyond the trilogy into a part 4?

Well that’s good to hear.  How very kind.  We had initially planned four videos so one does exist as a top line somewhere. I’d happily do 4,5 and 6 if you are up for watching them.  I take back my previous comments about tetralogies, I’m down.

Promonews talks to Biscuit Filmworks' director Ben Strebel about the combination of passion, ingenuity and trust that went into making his remarkable video for Skrillex, Four Tet and Starrah's …

Charles Mehling - director, photographer, and former bass guitarist of The Brian Jonestown Massacre, a rock band with a famous Rolling Stone referenced in their name - has now, finally, made …

Douglas Bernardt's new 15 minute short film/music video Sonho tells the extraordinary story of Brazilian musician Nego Bala, who was incarcerated in a terrifying juvenile jail when he was just …

A young man battles with small town life, in Matthew Thorne's second video for The Howl and The Hum.

The mystery of Bigfoot might just have been cracked, in Daniel Liakh and Acid News' hilarious …

Lu Xiao Wei directs a punchy promo for Pianwooo and Ill Japonia, in association with …